Subscribe to RSS
"THE RANTING OF AN ANT" - REMEMBER THE ALTERCATION BETWEEN THE GREAT ZIK AND DR CHUBA OKADIGBO WHEN OKADIGBO WAS POLITICAL ADVISER TO PRESIDENT SHAGARI. 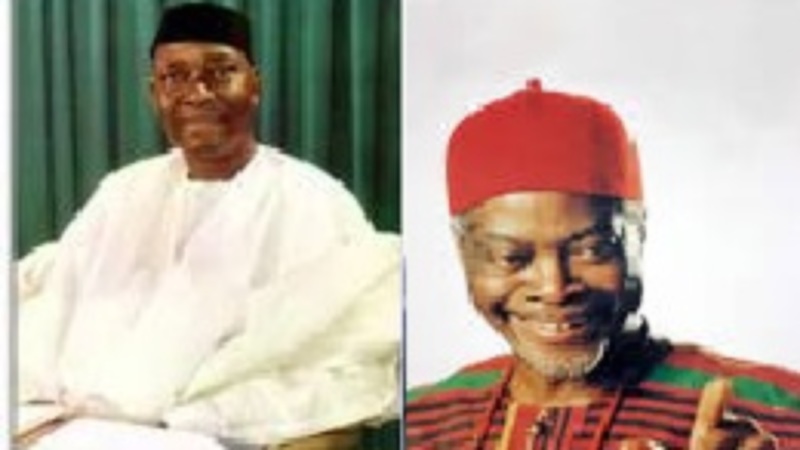 CAN ANYONE STILL REMEMBER THE ALTERCATION BETWEEN THE GREAT ZIK AND DR CHUBA OKADIGBO WHEN OKADIGBO WAS POLITICAL ADVISER TO PRESIDENT SHAGARI ?

We should learn never to insult our Elders !!

Can you still recall

Your statements can be likened to the Ranting of an Ant.

My boy, may you live to your full potential, ascend to as dizzy a height as is possible for anyone of your political description in your era to rise.

May you be acknowledged world-wide as you rise like an eagle atop trees, float among the clouds, preside over the affairs of fellow men...as leaders of all countries pour into Nigeria to breath into her ear.

But then, Chuba, if it is not the tradition of our people that elders are roundly insulted by young men before the world as you have unjustly

done to me, may your reign come to an abrupt and shattering close.

As you look ahead, Chuba, as you see the horizon, dedicating a great marble palace that is the envy of the world, toasted by the most powerful men in the land, may the great big hand of fate snatch it all away from you. Just as it appears as if nothing can possibly go away.

Chuba, as you look forward to hosting the world's most powerful leader and shaking his

hand, as you begin to smell the recognition and leadership of the Igbo people, may the crown fall off your head and your political head fall off your shoulders.

None of my words will come to pass, Chuba, until you have risen to the very height of your power and glory and health, but then you

will be hounded and humiliated and disgraced out of office, your credibility and your name in tatters forever....."

Foregoing was excerpt from the content of reply from the Late Dr. Nnamdi Azikiwe, while reacting to Chuba Okadigbo's insult passed on to Zik dubbed as the

You will agree that everything Zik said came to pass on Chuba Okadigbo before his death.

So it is always better to play the Omoluabi role model, even while discharging any dirty job, Political Spokesmen are admonished to take caution, please.   ALWAYS REMEMBER THIS !!

.The time was in Aug 1983 after the 2nd Republic Presidential elections won by Shehu Shagari(NPN) as announced by FEDECO Chairman, Ovie Whiskey. Awolowo(UPN), Zik(NPP), Aminu Kano(PRP), Ibrahim Waziri(GNPP) and Tunji Braithwaite(NAP), all lost the elections. Zik was complaining of the irregularities in that election at the same time he was mourning the death of his first wife, Flora Azikiwe. But Dr Chuba Okadigbo, a fellow Igbo like Zik, but in the NPN ruling Party, rubbished Zik and termed his complaints as the *rantings of an ant*, a whole Zik of Africa! Many personalities tongue lashed Okadigbo for going that far. It was at this point that Zik placed those curses on him, and declared leaving politics.

And all those curses came to pass before Okadigbo died in 2003.

Dr Okadigbo became the 3rd Senate President in the first term of OBJ's presidency in the 3rd republic, after Evan(s) Enwerem and Adolphus Wagbara, becoming at that time, the highest Igbo political office holder. He was well respected and revered in his Igboland, and seen as their new leader.

Meanwhile, in the US, the President, Bill Clinton was planning visiting Nigeria in later part of 1999 before he leaves office. Okadigbo being the SP was championing the preparations for Clinton's visit as the latter would address the joint houses of Parliament. But just before the visit, in a twist of political manouvrings, Okadigbo lost the Senate Presidentship to Anyim Pius Anyim, who eventually received Clinton to the view of the whole world. Falling from grace to grass, in a way.

He died in Sept 2003 in Abuja, a day after a political campaign in Kano where police was alleged to have sprayed him with tear gas, triggering breathing difficulties. No much assistance could be given to him before he gave up the ghost!!

Lesson: Do not insult elders.

WILL PEOPLE LEARN THEIR LESSONS?