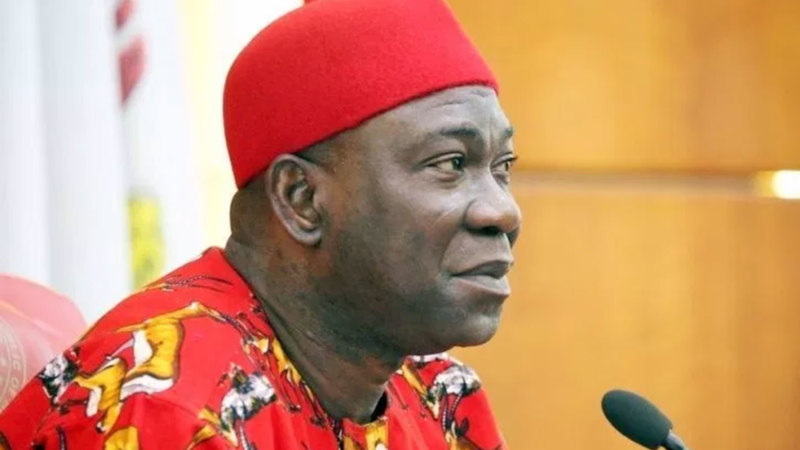 I believed initially that those were genuine concerns about the security situation in the South East.  However, I have come to the realisation that those making and inducing the statements are only playing politics with a very serious matter. The objective is to lay the foundation for the harassment and possible destruction of the opposition in the South East ahead of the 2023 General Elections.

It is on record that the South East leaders have at various times individually and collectively stated their positions on the challenges in the region, the concerns and demands of the South East people of Nigeria. They have also reiterated their opposition to the use of violence to resolve problems.

The position of the South East on Nigeria is well encapsulated in the Awka Declaration of 2018, and I am not aware that it has changed. Ohanaeze Ndigbo has also consistently reiterated this position.

My personal position was well laid out in my address entitled “Biafra: The Political, Economic, and Social Questions” presented at the meeting of South East leaders (South-east Governors, National Assembly members, Ohanaeze Ndigbo, traditional rulers, religious leaders, and leaders of thought) on political developments in the South-east and state of the nation held at the Nike Lake Resort Hotel on July 1, 2017. The same was adopted by meeting and also widely published by national dailies.

I have personally reached out to the President, His Excellency, Muhammadu Buhari, GCFR, both privately and publicly to advise on the treatment of the South East, restiveness in the region and the need to address their concerns. As Deputy President of the 8th Senate, I recall leading a delegation of South East Senate Caucus alongside our Caucus Leader at the time, Senator Enyinnaya Abaribe, to meet with Mr. President as early as November 9, 2016 to discuss the rising insecurity, growing agitations and germane concerns of the people of the South East region.  With benefit of hindsight, we recalled to the President that such steps as we proffered proved very productive in resolving the agitations and the detention of Chief Ralph Uwazuruike during the tenure of the late President Umar Musa Yar’Adua.

I equally made my position known in a letter entitled “Rising Tension in the South East: Re: Appeal to Call Off Operation Egwu Eke” and dated Thursday, 14th September, 2017 wherein I gave compelling reasons for dialogue and volunteered to rally Igbo leadership and activists to a roundtable with the President. The letter was published by the Vanguard newspaper under the title “Python Dance: Ekweremadu Writes Buhari, Urges Dialogue to Avert Another War”.  Unfortunately, all these efforts came to naught, as they were neither given appropriate attention nor operationalised.

Importantly, I have consistently advocated that justice, equity, better management of our diversity, and decentralised policing, including state police of which I sponsored a Bill to that effect in the 8th and current Senate, are the sure paths to peace and security in Nigeria. But these have largely been ignored.

In any case, it is sheer blackmail and out of place to say that South East leaders, myself inclusive, have been quiet on recent events in the region. Most recently, on Sunday, May 30, 2021 to be specific, the leaders of the South East Caucus of the National Assembly, of which I am one, as well as a Member of the Senate and House of Representatives from each State of the South East region issued a joint press statement wherein we unequivocally condemned the killings and attacks on public assets in our region and called on the security agencies to immediately unveil persons behind the crisis, especially the so-called unknown gunmen, and bring them to book.

I have equally been in personal touch with Ohanaeze Ndigbo Worldwide on the issues in the South East region. I have personally spoken with the governors of the South East, impressing on them the need to call meetings of all stakeholders in their states and engage everyone, irrespective of their political persuasions, to find solutions to the security challenges in their respective states in particular and the South East in general. I have personally spoken with Governor Hope Uzodinma on the need for a meeting of political stakeholders and leaders in Imo State to collectively proffer solutions to the turbulence in that state.

It is, therefore, unfortunate that some people prefer to blame everyone else, except themselves, believing that their brothers and sisters on opposing political divides will be profiled and taken out for them by federal might ahead of 2023 to make it easier for them to kidnap political positions in the South East. This is extreme and dangerous politics.

Nevertheless, it is imperative to underscore the fact that the rising insecurity and agitations in the South East are not peculiar to the region. It sadly has become a national new normal. From the North West to North Central, North East, South West, South East, and South South, there is a conflagration of insecurity, crises, and all forms of restiveness and separatist agitations.

Therefore, for emphasis, I reiterate that it is extreme and dangerous to play national or regional politics with serious matters such as we have on our hands today rather than solving the challenges before it is too late.  Pragmatic leadership and patriotism are needed at this time.  We need to rally Nigerians, and come together as leaders to provide solutions and not trade blames or seek to make political capital out of what is clearly capable of consuming the entire nation, including even any political ambitions by anyone.

Former Deputy President of the Senate and