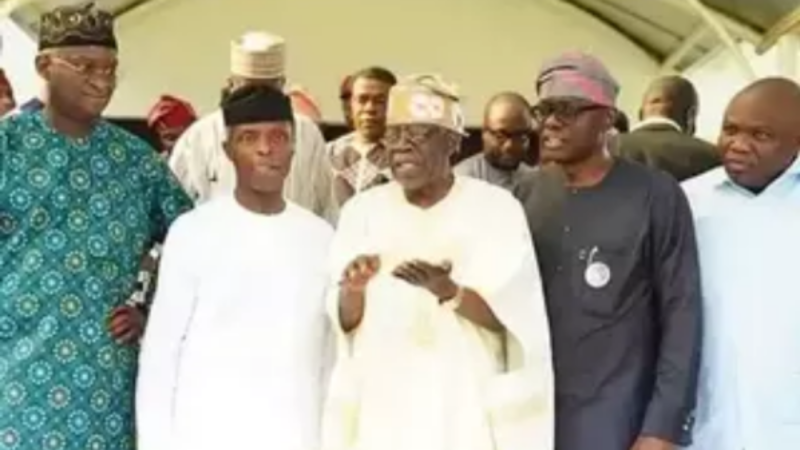 This was made known through an article published by the POLITICSNIGERIA, following the public declaration of their interest to run for 2023 presidential election, the heavyweight politicians who are same party leaders have now been alleged rigged out of favour with the Cabal.

The Cabal Has Lost Grip Of Kingmakers Power

Kperogi on his usual column, wrote an article titled: ” Why the 2023 Presidential Race Will Be a Shot in the Dark” , made available to POLITICS NIGERIA, Kperogi explains the various permutations and candidates being considered by the ‘ cabal’ . The article read;

” Bola Tinubu’ s announcement that he has informed Muhammadu Buhari of his intention to run for president in 2023 has triggered frenetic social media conversations about the 2023 elections. My own prognostication is that the race won’ t be as predictable as many people think it will be. ”

The political analyst insisted that even the alleged Aso Rock Cabal who poses as kingmakers, are not tightly gripping the chances of producing the next president, he said even themselves are in disarray.

” Even Aso Rock power brokers are in disarray. Their strategies and choices keep evolving like a kaleidoscope. At some point, they wanted to perpetrate one of their own in power, which would mean ditching the informal but nonetheless politically potent power sharing arrangement between the North and the South. ”

” They realized that such a move is not only politically risky but is also fraught with the sort of danger that might dissolve the Nigerian union if it succeeded. ”

” Then they toyed with the idea of supporting a ” weak” candidate from the South- South, such as Rotimi Amaechi, whom a northern PDP candidate— with whom they’ d strike a deal— can easily defeat. ”

” At some point, I heard that the cabal settled on PDP’ s Atiku Abubakar. But it appears that they later chickened out perhaps because they can’ t trust Atiku or because Atiku won’ t commit to their terms. ”

Speaking on Goodluck Ebele Jonathan, the columnist confirmed the rounding rumour about President Buhari’ s support for the former president as a means of reciprocating his 2019 gesture, moreover, the North feels the international peace icon should complete his second bid in office.

” Then came the Goodluck Jonathan card. I’ ve confirmed from people who should know that indeed the Buhari cabal had settled on supporting Jonathan as APC’ s candidate— with one of the members of the cabal, possibly Malami, as his running mate. ”

” As of a few days ago, the cabal, fearful of untoward backlash from the southwest if they support Jonathan to win APC’ s nomination (recall that the Southwest helped them upstage the same Jonathan in 2015) has backtracked and is restrategizing. ”

Cabal Does Not Want Neither Osibanjo Nor Tinubu

” As should be obvious by now, members of the cabal want neither Bola Tinubu nor Yemi Osinbajo. They both know this. Tinubu signaled this knowledge when he said Buhari ” didn’ t ask me to stop. He didn’ t ask me not to attempt and pursue my ambition. ”

” Why would he use a negation (” he didn’ t ask me to stop. He didn’ t ask me not to…” ) instead of an affirmation or a neutral statement to characterize Buhari’ s attitude toward his ambition? It’ s because he knows Buhari’ s puppeteers resent his presidential ambition. ”

” Where this gets even more intriguing is that the cabal is NOT nearly as influential and powerful as it once was when it was led by the late Abba Kyari. It’ s now easily vanquishable. Here’ s why. ” He said.

” Mahmood Yakubu, INEC’ s chair, was singlehandedly put in his position by Abba Kyari. So, he was beholden to him and did his bidding. Recall that Kyari, whose office isn’ t recognized by the constitution, breached protocol by inviting Yakubu to his office at the Presidential Villa for a closed- door meeting on October 26, 2018. ”

” None of the remaining members of the cabal has that sort of influence on the INEC chairman who is in his final term and therefore need not ingratiate himself with anyone for any favors. Notice that the INEC chairman has been showing unaccustomed independence lately, such as going against Aso Rock honchos by insisting on electronic transmission of votes. ”

” There’ s no Abba Kyari to dictate to him, and he’ s not indebted to members of the current cabal led by the perpetually narcotized and incompetent Abubakar Malami. ”

” So, don’ t dismiss anyone’ s ambition just yet. And don’ t be overconfident about anyone’ s- – or any political party’ s- – chances. This is probably the most variegated, endlessly changing patterning of political variables in Nigeria’ s recent political history. ” Kperogi analysed.