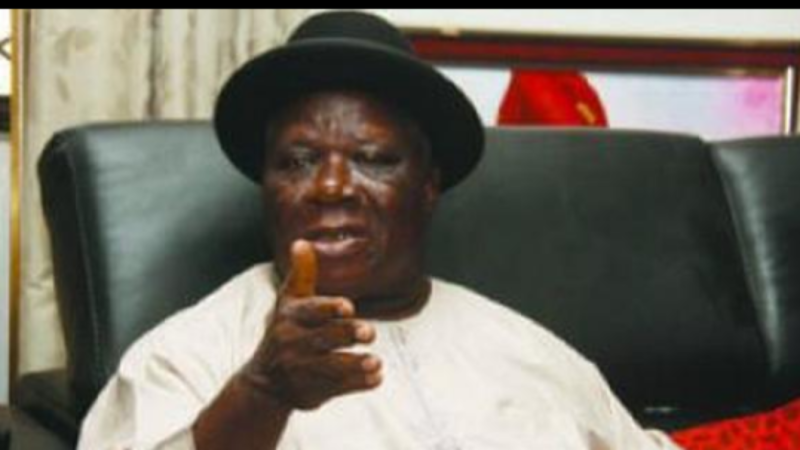 Come out with names of election riggers, make them lose visa privileges, Clark to US, UK, EU

…What IPOB, Yoruba agitation for secession are doing’ll be child’s play, if Nigeria’s not restructured, Clark warns

…Says some of them ready to go for treasonable trial, prison in interest of Nigeria

FORMER Federal Commissioner for Information and South South leader, Chief Edwin Clark, and ex-chairman of the Independent National Electoral Commission, INEC, yesterday, again, canvassed urgent restructuring of the country to nip in the bud the spate of secessionist agitations in the country.

While Clark noted that what the Indigenous People of Biafra, IPOB, and Yoruba Nation agitators were currently doing in their agitations for self-determination would be child’s play, if Nigeria was not restructured, Jega said the country needed to be urgently restructured, even only on short-term basis, before 2023 polls

According to Clark, the agitation for self determination and secessions will definitely increase, security situation of the country worsened, while the conduct of 2023 general and presidential elections will be threatened, if the country is not restructured.

Clark who noted that the South, North and the entire country were calling for restructuring, urged President Muhammadu Buhari to urgently convoke a Representative Assembly or Town Hall meeting to consider Governor Nasir El- Rufai of Kaduna State’s All Progressives Congress, APC, Committee Report on restructuring or that of 2014 National Conference report.

Addressing journalists yesterday at his Asokoro Residence, Abuja, the leader of Southern and Middle Belt Leaders Forum, SMBLF, warned that President Buhari must not allow Nigeria to break due to what he described as authoritarian attitude of one individual, stressing that restructuring had become very imperative.

He said this was so because it  remained one of the key priority issues in the APC’s manifesto when it was formed and during the 2015 Presidential campaigns which had now been abandoned on assumption of office by the President.

Clark said:  “Mr. President, I beg of you, in the name of Almighty God, I am now very close to 95 years, and on behalf of my fellow elders and our children, act now. We have no other country to call our own, no other country to go to, if Nigeria breaks due to authoritarian attitude of one individual.

‘’Please, retrace your steps, embrace and implement your party’s report, the El-Rufai’s APC Committee Report. Nigerians will accept it.

“I challenge Mr. President, Muhammadu Buhari, as the defacto controller of the APC, to convoke a representative assembly or town hall meeting to consider only the APC report on restructuring, if he sincerely believes in the unity of Nigeria, where everyone is a stakeholder, not a Nigeria where only a few or one ethnic group in minority keeps displaying autocratic and emperoic stance, reminding us of what their fore-fathers did over 100 years ago, wanting to do same today.

‘’Of course, it is a big NO!  It may be necessary here to remind Nigerians the role played by our illustrious son, late Gen. Murtala Mohammed, in the elimination of apartheid in South Africa when he was in office for only six months.

‘’It is, therefore, unimaginable and understandable that an officer in the government of Gen. Murtala Mohammed will be the one to create an obstacle or oppose what his former boss instituted. And this was what our beloved late General Murtala Mohammed went to South Africa to fight against.

We cannot be slaves in our own country.

“The National Executive of the APC, in a meeting also attended by Mr. President, Muhammadu Buhari, himself as party member, accepted the report of the El-Rufai Committee, and stated that it will be sent to the National Assembly.

“However, same Mr. President has refused to take any definite action for the report to be sent to the NASS. What several Nigerians want is actually the restructuring of the country in order to douse the tensions and agitations which are almost tearing the country apart today, and is the main cause of the high insecurity being experienced.

“Nigerians are ready to accept the implementation of the 2014 National Conference, or the APC’s El-Rufai Committee Report, any of which will no doubt satisfy the generality of the Nigerian people.

“It is, indeed, shameful and unpatriotic for the Lleaders of APC to pretend that they have not seen the El-Rufai Committee report or even the 2014 National Conference report. Some are even shamelessly stating that they do not know what restructuring means, and allow President Muhammadu Buhari to take over total control and direction of the party’s government.

‘’Instead, they are more interested in whom is to take over from him in 2023, for which they pretentiously worship him like god just to gain favour. The Tinubus who brought restructuring to the manifesto of APC have not spoken because they fear that if they do, they will not be allowed to contest for the Presidency of the country, come 2023.

“For which his party, the APC, faced with stiff opposition for not implementing their promised restructuring programme. So, the party’s national executive, including President Buhari, decided to set up a committee under the chairmanship of Nasir El-Rufai, the governor of Kaduna State, with other prominent party members as members.

‘’The committee called for memoranda from Nigerians, went around the country and came out with a report that buttressed restructuring.  Nigeria  must be ready. The prison is not only for thieves, it is also meant for those who   are fighting for the interest of their country.

‘’Some of us are ready for treasonable trial. We’re ready to go. Nobody loves this country more than myself. Enough is enough!

On his part, former National Chairman of the Independent National Electoral Commission, INEC, Prof. Attahiru Jega, advocated a short-term restructuring before the next general election to address myriads of challenges confronting the country.

Jega, however, accused the executive and legislative arms of the Federal Government of treating the restructuring issue with levity

The former university don, who stated this at the 2021 Public Lecture of the Achievers University, Owo, Ondo State, in the lecture, titled ‘’Towards stabilizing the Nigeria Federation’’ said:  “There seems to be lack of political will on the part of those who are at the helm of affairs in the nation’s executive and legislative arms of government.

“ In the present circumstances, as necessary and desirable as restructuring is, a number of challenges would have to be overcome to successfully bring it about.

“First, passion has been inflamed and allowed to circumscribe the discourses of restructuring, resulting in the emergence of hardened antagonistic positions, which if allowed to persist, would make reconciliation and consensus building very difficult indeed, if not impossible.

“The perceptions of exclusion, marginalization and exploitation are so deep-seated that they nurture and deepen divisions, polarisation and illogical if not irrational agitations by extremist groups.

“In the circumstances, conversation, debate and dialogue are, if at all, conducted at cross purposes, obstructive of accommodation of differing opinions and the pursuit of a rational and logical process of consensus-building and bringing about desirable restructuring of the Nigerian federation.

“Second, in the governance sphere, at both the federal executive and legislative levels, the political will and competence seem lacking for the pursuit of credible and popularly acceptable procedures and processes of bringing about appropriate and desirable restructuring.

“The executive seems to take a back seat in the belief that restructuring is purely a legislative matter, into which it should not dabble, thereby failing to provide the requisite, proactive leadership for driving the agenda and process of restructuring.

“On its part, the legislature seems to take an overly legalistic posture, impatient with, and indifferent to, calls for transparent, inclusive and people-oriented strategies for achieving popularly acceptable restructuring.

“A broadly participatory, inclusive and responsive process would lend greater legitimacy to the end product of any restructuring and constitutional amendment processes.

“Regrettably, members of the National Assembly have failed to recognize the desirability of doing this.

“Third, rather than prioritizing restructuring and focusing on addressing the key discernible challenges to power sharing and resources distribution/allocation

amongst the subnational, federating units, the legislature pursues a comprehensive/ wholesale constitutional amendment process, with many contentious issues taken on board simultaneously.

“This makes the process time consuming, overly contentious and controversial, and susceptible to filibuster, and likely derailment of the entire undertaking.

“Fourth, leaving the very important business of restructuring until very close to the next general elections has its own challenges, given that Nigerian politicians tend to shy away from taking tough decisions in the national interest, especial on seemingly controversial issues, too close to general elections.”

Jega, however expressed optimism that restructuring could be achieved if the stakeholders could do the needful, advocating a short-term restructuring before the 2023 general election.

“ In spite of the challenges, the prospects of restructuring are not as hopeless as some would assume them to be.

“For all these, better management of ethno religious diversity on the basis of rule of law, justice, equity and equality of  opportunity, is a necessary precondition.”