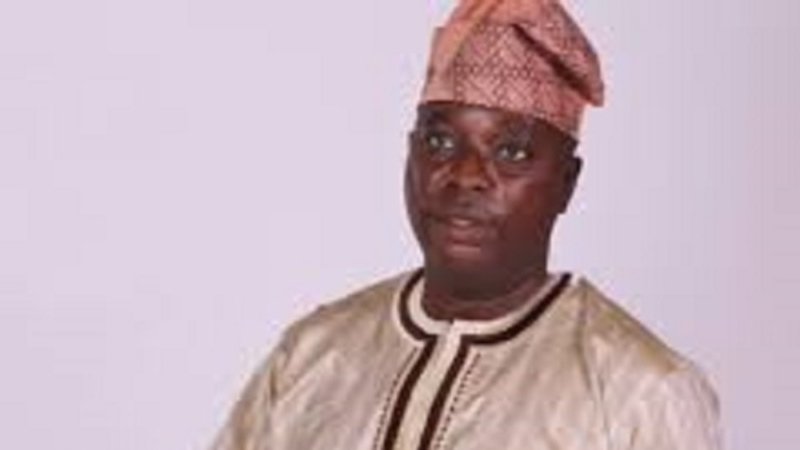 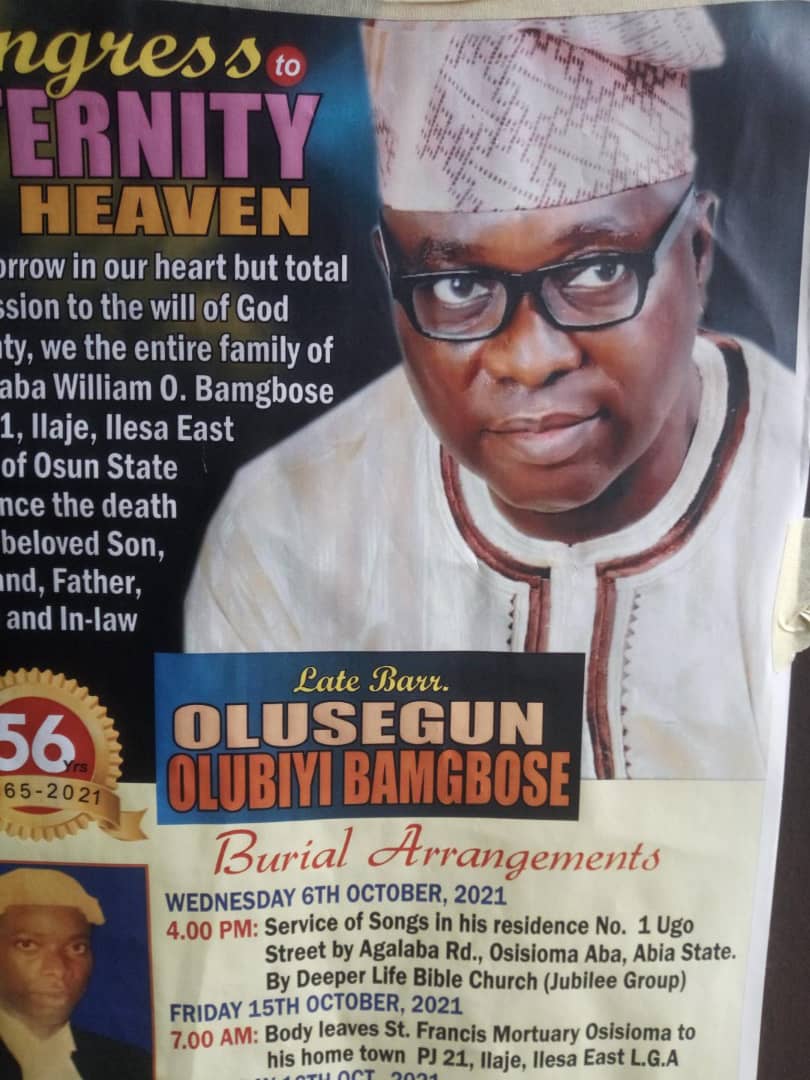 The Times and Life

Late Barrister Olusegun Olubiyi Bamgbose was born to the family of Late Mr. and Mrs. William Oluwadaisi Bamgbose of Ilaje, Ilesa West, Osun State on the 11th day of January, 1965.

Late Barrister Olusegun Olubiyi Bamgbose attended Okusanya Memorial Primary School, Agege, Lagos State between 1970 and 1977 after which he proceeded to Lagos Baptist Secondary School, Oke Odo, Agege from 1977 to 1982, Baptist Academy, 1983 to 1984, Igbobi College, Yaba 1984 - 1986. He gained admission to Lagos State University, Ojo where he studied law and obtained his Bachelor of Law(LL.B) degree with Second Class(Hons)from 1988 to 1994. He attended the Nigerian Law School, Lagos between 1994 and 1995. He was called to the Nigerian Bar by the Body of Benchers on the 22nd of March, 1995. He was posted to Abia State for his Youth service in 1995. He served with the Deeper Life Bible Church, Aba, Abia State between 1995 and 1996.

In the year 2000, he initiated the vision of cleaning and beautification of Abia State roads to the then governor of Abia State, Gov. Orji Uzor Kalu, which vision the governor caught and awarded him the contract and it was effectively carried out in Aba and Umuahia cities then. Thank God the project is still going on till date even though he is not the one handling it now.

In 2002 he was also given an appointment as Special Assistant to the Governor on Inter-Ethnic Affairs by the same Gov. Orji Uzor Kalu’s regime which post he held till the governor left office.

While in Aba he was also very active in the Church, he was in the choir before he was appointed to pastor the Yoruba district of the Church at 35 St. Michael’s Road, Aba in 1999. He also pastored other district Churches in the then Abayi Group (now Jubilee group) such as MCC, World Bank West and Umueze districts. He was a strong member of the International Friendship League (IFL) of the church before its dissolution by the church authorities. Presently he fellowshipped with Ntigha Ukpakiri district of Obingwa Region where he also dedicated his resources to the best of his ability before his demise. He printed some gospel tracts which he used for personal evangelism (he personally goes to the motor parks and Abia State Polytechnic gate to share the tracts to the youths from time to time and also made sure his family members did same).

He got married to Mrs Lois Bamgbose (Nee Ahuruonye) of Mkpuka village in Isiala Ngwa South L.G.A of Abia State on 13th April, 2002. The marriage was blessed with three children – two boys and a girl.

He was a very sociable and amiable person to stay with. He had burning passion for the well-being of the youths of our dear country Nigeria. Hence, he sought for several ways of influencing the government to better the lots of our youths. He embarked on such projects as Youth Engagement Scheme (YES), an Abia State sponsored programme during the regime of Gov. Orji Uzor Kalu which gave employment to many Abia youths then. He also established CONCERNED ADVOCATE FOR GOOD GOVERNANCE (CAGG) to bring out the voices of the youths to the government in quest for good governance which project he was still working on till his demise.

He was truly committed to the promotion and protection of environmental, human and democracy rights which aligned with FENRAD's goals. He led and piloted the legal department with such impeccable professionalism as a lawyer properly, FENRAD made many wins working together through his wise and ever-ready counsel

He was a strong voice on matters of good governance and human rights advocacy. He was richly endowed with political sagacity and was consistent in holding governments to account as he lent his voice to the most critical of national and local issues. Through his intervention and actions, government relaxed many unpopular policies. He was a fine gentleman, very hardworking, a lovely husband, father and friend to all. His humble mien, approach and disposition endeared him to many

He is a chieftain of New Nigeria people’s party (NNPP) and have declared his interest to run in the 2023 presidential election under the umbrella of the NNPP before the demise.

He wrote several articles in many national newspapers and local television and radio stations such as Daily Post, Vanguard, MCL, Vision Africa, etc. sensitizing the government on the need for good governance, security and provision of employment and better life for the teaming population of the Nigerian youths. He will be greatly missed by his family and thousands of his fans who were anxiously looking forward to the materialization of this project.

In the early hours of Thursday, 16th September, 2021 it pleased the Lord to call him back home after a brief illness. It was very painful to us but we have no option than to submit to the perfect will of his maker.

Sleep on dad, we love you but God loves you more.

May his gentle soul find rest in the bosom of the Almighty. Adieu to the great iroko, an icon and a towering legal luminary!

He is survived by his wife, children, brothers, sisters, in-laws and host of other relatives.