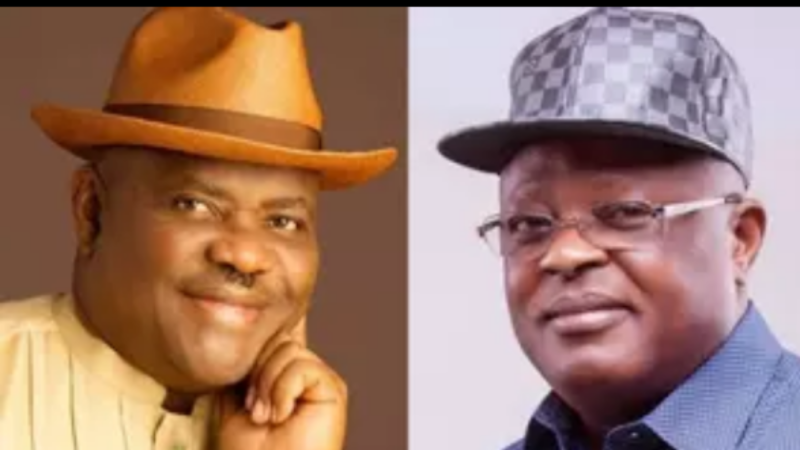 Governor David Nweze Umahi of Ebonyi State has stylishly challenged his Rivers State counterpart, Nyesom Wike to a debate following a remark made by Wike that a Psychiatric check up should be conducted to a Governor who said God will give Nigeria another President like Muhammadu Buhari in 2023.

9news Nigeria had reported that Umahi during a visit to President Buhari in Abuja told State House correspondents that God should give Nigeria another President like Buhari because he has a good heart.

Speaking at a dinner organised by Ebonyi State Government in honour of Turkur Brutai, Nigeria’s Ambassador to Benin Republic, Umahi said he is open to debate with any PDP Governor who feels he has delivered more democracy dividends to his citizens than the APC led administration in Ebonyi State.

According to him, “People are taking special interest in Ebonyi State and her Governor, positively and negatively but it is very important to be in the news than for you to say there are thirty-six states, you will name 35 and say what is the other State, we have aborted it, we are now a State to reckon with and we have no apologies.

“When I say I have no apologies, you can talk everything about me but you can not say we have not delivered and so when people open their mouths in PDP to talk about APC, they should know that I belong to APC and if they like, let PDP offer any of their best Governors to come for debate with me and I will defeat any of them, not to be talking and talking. You don’t sit on people’s sweat and resources and be talking nonsense.

“We have no regrets taking our people to the center. We have always played at the center, we are not playing party politics, we are playing politics that will be an advantage to our people, criticize me, no problems but we need resources, we need friendship with the center.”

Responding, the visiting Ambassador to the Republic of Benin, Ambassador Tukur Buratai commended Governor David Umahi on his infrastructural transformation of Ebonyi State.

While describing the Governor as a General in strategy and tactics, Ambassador Buratai said Governor Umahi has become a household name in Nigeria because of his ardent support to the welfare of the Army Officers.

He thanked the Governor for the warm reception offered him and lauded him for the replica of the Dubai Mall, being the Shopping Mall constructed by the Umahi administration among other landmark projects.

“Let me also say the Governor Umahi is not just a general in development but he is equally a general in Strategy and Tactics.

“Your relationship with Mr. president has worked and has brought about the needed development in Ebonyi State.

“Your Excellency you are a visionary leader and your legacies will endure till the end of time.”